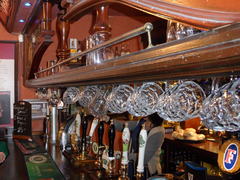 Planning conditions may be inconvenient, but those who persist in breaching them can expect to be prosecuted and severely punished. In one case, a bar owner and his company received fines of £146,000 after flagrantly defying planning enforcement notices.

The man had obtained planning consent to convert the premises into a public house. That was, however, subject to conditions and he was required, amongst other things, to install a new shop frontage and effective sound and vibration proofing before the bar opened. He failed to meet those conditions and was served with enforcement notices by the local authority.


His defiance continued, however, and he was fined £90,000 after pleading guilty to breaching the notices. He also received a £225,000 confiscation order and was ordered to pay prosecution costs of £21,080. The company which ran the bar, of which he was the sole director, was fined £56,000.


The facts of the case emerged as the man challenged the amount of the fines before the Court of Appeal. In rejecting his complaints, however, the Court described the breaches of planning control as flagrant. He was a wealthy man who drove a Rolls-Royce and owned at least one yacht. In the circumstances, neither his fine nor that imposed on his company were excessive.