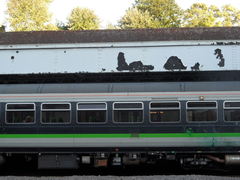 Japanese knotweed is a pernicious nuisance that blights property values. However, a landmark Court of Appeal ruling has established that, if it encroaches onto your land from a neighbouring property, you are entitled to compensation.

The case concerned two neighbours whose bungalows backed onto a railway embankment which, for more than 50 years, had been home to a burgeoning stand of Japanese knotweed. After they launched proceedings, a judge ruled that Network Rail Infrastructure Limited had for years been aware of the plant’s presence on its land and should have known that it posed a reasonably foreseeable risk of causing damage or loss of amenity to neighbouring properties.


The company’s efforts to eradicate the plant had been inadequate and the judge found that its failure to match up to its duty as a landowner had caused a continuing nuisance to the neighbours and a diminution in the value of their homes. Each of them was awarded about £15,000 in compensation, including sums that reflected the reduction in the market value of their properties.


In ruling on the company’s challenge to that decision, the Court noted that Japanese knotweed is classified as controlled waste and can only be disposed of by licensed contractors. Specialist herbicides are needed to tackle it and its roots, once removed, have to be buried five metres underground, behind a protective membrane, in order to prevent re-growth. It can block drains and undermine structures if left uncontrolled, and mortgage companies are cautious about lending money on the security of homes located within seven metres of Japanese knotweed.


The Court ruled that the judge had been wrong to hold that the presence of Japanese knotweed within seven metres of the bungalows was an actionable nuisance simply because it had diminished the value of the properties. The purpose of the tort of nuisance was not to protect the value of property as an investment or as a financial asset, and to extend the law in order to provide compensation for pure economic loss would be radical and unprincipled.


In dismissing the company’s appeal, however, the Court ruled that the encroachment of Japanese Knotweed rhizomes onto the neighbours’ land amounted to a nuisance in that it harmed the amenity value of their properties. The presence of the plant placed an immediate burden on landowners in general, given the difficulty and expense of removing it. The plant could fairly be described as a natural hazard which interferes with landowners’ ability to make full use of and enjoy their properties.