Commercial contracts mean what they say and judges will only imply terms into them if they are needed to achieve business efficacy or if their inclusion is so obvious as to go without saying. The High Court succinctly made that point in a case concerning the future operation of five North Sea gas and oil field blocks. 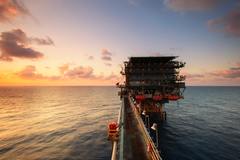 The blocks were exploited as a joint venture by five companies under contract with the UK government. One of them (the operator) was appointed under a series of agreements to physically operate the blocks. That appointment was, however, terminated following a unanimous vote by the other joint venturers.

The right to terminate the appointment by a majority vote was, on the face of the relevant contracts, absolute. The operator, however, argued that it was impliedly qualified by a requirement that the other joint venturers exercise their power of termination in good faith and neither arbitrarily nor capriciously. On that basis, it was submitted that the termination was invalid and of no effect.

In rejecting those arguments, however, the Court noted that there was no dispute that the correct contractual procedures were followed before the operator was given notice of the termination of its role. The relevant provisions of the agreements were clear and unambiguous and there was no basis for implying the qualifying terms contended for by the operator.

The Court noted that absolute rights to terminate commercial relationships, without any requirement to show cause or give reasons, are an everyday feature of professionally drawn or standard form contracts. Implying qualifying terms into such contracts would be an unwarranted interference in the freedom of the parties to contract on the terms they choose.

In ruling the termination of the operator’s appointment valid, the Court found that one of the other joint venturers, who wished to take over the operator’s role, was entitled to have regard to its wider commercial interests and its subjective, but genuine, concerns about the operator’s abilities and performance. No improper inducements had been offered to the other joint venturers, who voted in favour of the termination because they too believed it to be in their best interests.