Unforeseen tax implications can turn what appears to be a good deal into a bad one, and that is why it is always wise to take expert advice before signing on the dotted line. The point was made by a case concerning Capital Gains Tax (CGT) liabilities arising on compensation paid to a retired partner in a property firm. 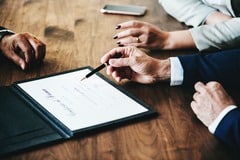 For 15 years following his retirement, the partner received an annuity in the form of a share of the firm’s profits. At that point, a restructuring of the firm triggered a clause in the partnership agreement which entitled him to instead receive a one-off compensation payment. The objective was that the compensation would enable him to purchase an annuity that would provide him with an income equivalent to that which he had received previously. It was a term of the partnership agreement that the firm would indemnify him against any CGT that became payable on the compensation sum.

Following lengthy negotiations in respect of the amount of that sum, an agreement was reached whereby the partner received over £700,000 in what was expressed to be full and final settlement of all his claims against the firm, under the partnership agreement or otherwise. Only later did he realise that a substantial part of that payment was likely to be subject to CGT in that he had effectively made a capital disposal of his right to receive an annuity from the firm.

After the firm refused to indemnify him against the potential CGT liability, the matter was referred to an arbitrator for resolution. He found in the partner’s favour, directing the firm to provide him with a full indemnity against the prospective bill and any interest or late payment penalties that might be levied by HM Revenue and Customs.

In upholding the firm’s appeal against that decision, brought under Section 69 of the Arbitration Act 1996, the High Court found that the arbitrator had erred in law by construing the settlement by reference to the parties’ subjective intentions, rather than the words actually used. The Court concluded that the full and final settlement released the firm from what would otherwise have been its obligation under the partnership agreement to indemnify the partner in respect of CGT.