Exotic Dancer Can Set Off Cost of Skimpy Dresses Against Tax 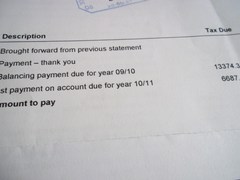 Uniforms and other articles of clothing worn by self-employed people wholly and exclusively for the purposes of their work are tax deductible. In an important decision, the First-tier Tribunal (FTT) ruled that the skimpy dresses, high heels and suggestive lingerie worn by an exotic nightclub dancer benefited from the tax break.

After the woman ceased her dancing career, HM Revenue and Customs (HMRC) raised back-tax and late payment penalty demands against her, totalling over £10,000. That was on the basis that she had wrongly sought to set off the cost of clothing she wore in the club and other expenses against her Income Tax liabilities.


In upholding her challenge to the demands, the FTT accepted that her black lingerie, see-through spangled dresses, faux nurse and schoolgirl uniforms and 10-inch high heels – which were adapted for use in pole dancing – were all tax deductible. The items of clothing were in no way designed to provide warmth and decency and were unsuitable for wearing outside the confines of the club.


The woman had purchased them solely for the purposes of her performances and they were akin to stage clothes acquired by a self-employed actor. Her heavy make-up, hair extensions, false eyelashes, spray tan and other beauty treatments were also allowable, being essential for her work. Although the costs she incurred in travelling to and from the club were not deductible, the FTT’s ruling meant that the tax and penalty assessments would be greatly reduced.