Remote hearings via Zoom, Skype and other communications software have made it possible for the family justice system to continue functioning during the COVID-19 pandemic. However, as a Court of Appeal case showed, such hearings carry the ever-present risk of private comments being overheard. 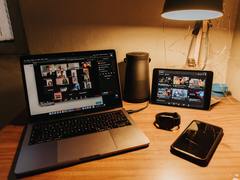 The subject matter of the case could not have been more serious in that a mother was accused of either causing the death of her toddler or failing to protect him from the man with whom she lived. A family judge was engaged in a fact-finding hearing which was designed to uncover the truth about the child’s death and, if possible, to identify a perpetrator or perpetrators.

Due to the pandemic, the judge conducted a hybrid hearing, during which some of the parties, their witnesses and legal representatives appeared physically in court whereas others attended via Zoom. The mother was in the witness box when she said she had developed a cough. The judge, completely appropriately, sent her home and agreed that she could give the rest of her testimony via Zoom.

After the court rose, however, a court official followed the judge into her chambers bearing a laptop which, although closed, remained linked to Zoom. Those in the courtroom, including the mother, overheard the judge having a private phone conversation with her clerk in which she expressed her frustration that the hearing, which had already overrun its allotted time, would be further delayed.

The judge was overheard to make a number of pejorative comments about the mother, including that she was pretending to have a cough and that she was trying every trick in the book to avoid answering difficult questions. The mother’s lawyers later asked the judge to recuse herself – effectively bow out – from continuing to preside over the hearing. She refused to do so, but the matter was adjourned pending an emergency application to the Court of Appeal.

Ruling on the matter, the Court noted that what happened was a consequence of the tremendous pressure under which family judges found themselves during the pandemic. All over the country, judges were battling against powerful odds to keep the show on the road for the sake of children.

Expressing considerable sympathy for the judge, the Court noted that she had made her regrets plain and accepted that her comments were very critical. At no time prior to making her overheard comments was there any suggestion that she had shown bias or approached the case with anything other than scrupulous fairness.

In allowing the mother’s appeal, however, the Court found that the judge’s comments were such that a fair-minded and informed observer might conclude that there was a real possibility of bias on her part. She should thus have recused herself. The Court directed that the fact-finding hearing should proceed before a different judge.