A glass of champagne and a slap-up dinner are considered by many music lovers to be important features of a night at the opera – but can the heavy cost of putting on lavish productions be set off against VAT payable on such catering supplies? Sadly for the Royal Opera House, a tax tribunal has answered that question in the negative. 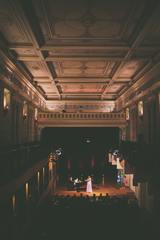 Whilst accepting that opera and ballet performances are the main draw, the Royal Opera House Covent Garden Foundation argued that dinner, drinks at the bar and ice creams during intervals were all part of a fully integrated visitor experience. HM Revenue and Customs (HMRC), however, refused to permit VAT-exempt production costs to be set off against VAT payable on those catering activities.

The Foundation’s challenge to HMRC’s stance was upheld by the First-tier Tribunal (FTT), which found a direct and immediate link between the costs of producing the opera house’s highly acclaimed performances and its catering services. Music lovers were drawn to use the catering facilities after buying tickets to the performances and revenue generated by the former was essential to funding the latter.

In upholding HMRC’s appeal against that ruling, however, the Upper Tribunal (UT) found that the FTT had erred in focusing excessively on the commercial link between production costs and catering services. The fact that production costs enabled the Foundation to make catering supplies by attracting customers who bought opera or ballet tickets was insufficient to establish a direct and immediate link.

Considering the matter afresh, the UT found that the production costs and catering facilities represented two separate supplies and that there was only an indirect link between them. Production costs, including printing of programmes, were specifically attributable to the ballet and opera performances. However, the same could not be said of the catering supplies in that there was no direct or immediate link between the production costs and, say, supplying champagne at the opera house’s bars.

Although the performances clearly promoted customer use of the catering supplies and assisted visitors in enjoying a fully integrated experience, that was insufficient in itself to enable a conclusion that the production costs were a cost component of the catering supplies. The UT noted that, in its view, its conclusions in the case did not in any way depart from economic reality.