Employers must provide all the equipment needed to help disabled workers perform as efficiently as possible, and failing to do so can by itself amount to discrimination. A case on point concerned an NHS nurse who, due to a range of disabilities, needed specialised software to assist her in writing up her clinical notes. 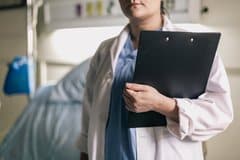 The nurse suffered from an inherited disorder which restricted the use of her hands and made it difficult for her to sit or stand for long periods. She was also dyspraxic and dyslexic. She had difficulty operating the standard software used by her NHS trust employer and frequently had to stay on late at work in order to finish writing up patient care records. Although she was provided with various disability-focused software packages and equipment, she said that they either did not work properly or were insufficient to enable her to function as efficiently as she wished.

She complained to an Employment Tribunal (ET) alleging discrimination on the part of the trust in failing to make reasonable adjustments to cater for her disabilities. Her claim was, however, dismissed on the basis that the trust had made genuine and serious attempts to address her particular needs. The ET also found that her inability to work as efficiently as she could have done but for the trust’s alleged failures did not amount to a substantial disadvantage.

In upholding her challenge to that decision, the Employment Appeal Tribunal (EAT) found that the ET had erred in its approach to the issue of whether the trust operated a provision, criterion or practice (PCP) by which its staff were generally required to use conventional software. If the alternative equipment and software provided to her did not meet her needs, any such PCP was capable of having a discriminatory effect on her. Alleged failures to provide her with software updates and timely laptop access to the trust’s Wi-Fi system were also potentially discriminatory.

If it were shown that a failure by the trust to provide her with adequate equipment and software impeded her ability to work as efficiently as she desired, the EAT found that that would amount to a substantial disadvantage. Remitting the case for reconsideration, the EAT left it to a regional employment judge to decide whether the fresh hearing should be before the same or a differently constituted ET.