Emergency vehicles have to move fast in order to save lives, but their drivers are not immune from the rules of the road and have to be as careful as any other motorist. In a case on point, a young woman who was struck by a fire engine as it rushed to answer a 999 call won the right to substantial compensation. 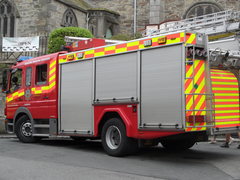 The lights of the bright red fire engine were flashing, and its siren wailing, as it travelled along a busy urban road in the early hours of the morning. The woman, who was aged 28 and had been to a party with friends, moved between two parked cars into its path and was struck on the head by its wing mirror. She suffered life-changing injuries and launched a compensation claim against the fire brigade that employed the driver.

The woman testified that she had suffered abuse at the hands of a group of youths near a kebab shop and that she had contacted the police from a telephone box. On seeing the fire engine’s lights, she assumed that it was a police vehicle responding to her call and she moved into the road in an attempt to attract its attention. The driver, however, said that she had completely blocked his path, giving him no safe opportunity to avoid hitting her.

Ruling on the matter, a judge found that the woman, who suffers from a personality disorder, was in an agitated state and under the influence of alcohol and cannabis at the time of the collision. She was behaving unpredictably and had moved rapidly and continuously into the road, waving her arms erratically.

On the other hand, the judge found that the driver should have perceived the active crowd outside the kebab shop as a hazard. He was travelling at about 45 mph and that was simply too fast in the circumstances. He should have started braking as he saw the woman emerge from between the parked cars in a manner that suggested that she did not appreciate the danger and had no intention of affording the fire engine the precedence it clearly demanded.

The judge found that the woman and the driver were each 50 per cent responsible for the accident. The amount of her compensation would be assessed at a further hearing, unless agreed. Even after a 50 per cent reduction, her award is bound to be substantial given the severity of her injuries.