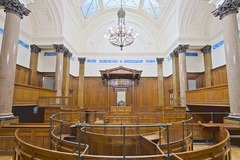 Photography and visual or audio recording is, for security and other reasons, strictly banned in court. A criminal defendant who defied that embargo by using his mobile phone in a secure Crown Court dock was jailed for his senseless act of bravado.

The man and a number of co-defendants were on trial following a violent armed raid on a travellers’ site in which a teenager was shot in the face with a double-barrelled shotgun and almost blinded. In the event, he entered a late guilty plea to a charge of conspiracy to commit violent disorder and was subsequently sentenced to a three-year jail term.

A police officer later received an email with video footage attached. The footage had been taken in the dock as the court was assembling. It showed the man pointing his mobile phone at himself before panning round to show other defendants who were heard to laugh. Dock officers and defence barristers also featured. After the footage was traced to the man’s phone, the Solicitor General applied for his committal to prison for contempt of court.

Ruling on the matter, the High Court noted that the Crown Court building was replete with signs warning people to switch off their mobile phones and not to take videos or photographs. Having been taken in the context of a criminal trial for serious offences of violence, involving elements of vengeance and intimidation, the footage had clear security implications and could have been widely circulated.

The Court accepted that the man’s use of his phone had not in fact disrupted the trial because it was not detected at the time. However, it had the potential to do so. He had admitted contempt and expressed sincere remorse, but the Court found that the seriousness of his conduct, which revealed an element of bravado, required nothing short of imprisonment. He was jailed for two months.