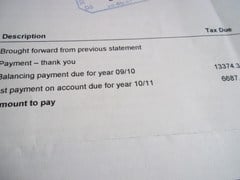 Financial penalties in respect of inaccurate tax returns can be swingeing but, like any other fine, they can only be imposed on wrongdoers. The point was made by a case in which an accountant was relieved of a substantial penalty on the basis that he had not been careless and honestly believed in the accuracy of his returns.

For about three years, the accountant served his clients through a limited partnership in which he was the sole active partner. Due in part to his serious health problems, the partnership suffered losses in excess of £200,000. After the partnership was dissolved and he provided his services through other firms, he sought to set those trading losses off against his subsequent earnings for Income Tax purposes.

Following an inquiry into his affairs, HM Revenue and Customs (HMRC) disallowed his set-off claims and raised a back-tax demand on income in excess of £195,000. That demand was later amended downwards, but a penalty of more than £55,000 was imposed on the basis that the inaccuracy of three successive tax returns was deliberate.

In upholding the accountant’s appeal against the penalty, the First-tier Tribunal (FTT) took account of his poor health at the relevant time. He had also been suffering from depression, brought on by a painful divorce and business difficulties, and had frankly conceded that his financial affairs had been in a mess.

Far from it being a case of someone who could not be bothered to get things right, he had honestly, but mistakenly, believed in his entitlement to make the set-off claims. His view was neither spurious nor fanciful, and he had openly explained to HMRC exactly what he had done and why. He had taken reasonable care in making the returns and their inaccuracy was neither deliberate nor careless.