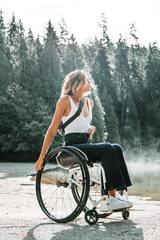 No amount of money can ever compensate for the promise of a young life ruined by clinical negligence, but it can at least provide security for the future. In one case, a recently married woman who suffered a catastrophic stroke following failures in diagnosis and care won millions in damages from the NHS.

The woman was in her 20s and training to become a teacher when she went to hospital after suffering a transient ischaemic attack – effectively a mini-stroke. Had she been treated with a blood-thinning drug, she would have made a full recovery. That, however, did not happen and she later suffered a major stroke, resulting in a lifetime of disability and the end of her career hopes.

Although capable of walking short distances with the aid of a stick, she is prone to falls and has to use a wheelchair when out of doors. She has little or no use of her right hand and arm and has difficulty understanding speech and finding the right words to express herself. Frustrated by her limitations, of which she is fully aware, she suffers from anxiety, depression and fatigue.

After the NHS trust that ran the hospital admitted liability in full for her injuries, its chief executive wrote a letter to her and her family, apologising for the substandard care she received. Following negotiations with her legal team, the trust agreed to settle her damages claim for a £5 million lump sum, together with index-linked payments of £73,000 a year to cover the costs of her care for life. The High Court approved the settlement.