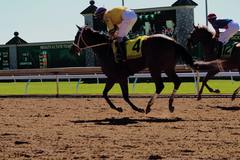 One of the most distressing aspects of road traffic accidents involving young people is that they can shatter their hopes for the future. In a case on point, a crash victim received eight-figure compensation for injuries which wrecked her prospects of becoming a top racing jockey.

Horses were her first love and the then teenager was working as an apprentice jockey at a leading racing stables when she accepted a lift in a young man’s car. He crashed after driving too fast and she was catapulted through the windscreen, hitting a tree. She suffered dreadful internal injuries, multiple broken bones and a severe traumatic brain injury, and her life hung in the balance for months afterwards.

Following intensive rehabilitation, she had made a remarkable recovery. She learnt to walk and talk again and was able to entertain her loved ones with her acute sense of humour. However, despite all the progress she had made, largely due to the selfless care of her parents, she would always require 24-hour supervision and would never be able to live fully independently.

After proceedings were launched on her behalf, the driver’s motor insurers swiftly admitted liability for the accident and played a cooperative part in ensuring that she received the best possible rehabilitation. Following negotiations, the insurers agreed to settle her claim for a lump sum of £13,317,000. The settlement was approved by the High Court.