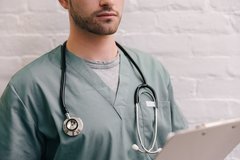 Employers are of course entitled – even obliged – to inquire into alleged misconduct by members of their staff. However, as a High Court case concerning a suspended NHS consultant surgeon showed, contractual safeguards designed to ensure the fairness of such investigations must always be respected.

The consultant faced complaints about his conduct and aspects of his approach to clinical practice, the majority of which related to his interactions with colleagues. His employer, a Welsh health board, suspended him from his post pending the outcome of an investigation pursuant to a contractual procedure which applies to all NHS doctors and dentists in the principality.

He had been suspended for over two years when he was informed that there would be an additional, parallel, inquiry (the working relationships investigation) with a view to determining whether his relationship with his colleagues had irretrievably broken down and, if so, what should be done. He launched proceedings with a view to blocking that investigation.

He pointed out that the contractual procedure provided him with important safeguards against unjustified disciplinary action as well as a fair opportunity to achieve vindication and to safeguard his reputation. The working relationships investigation clearly related to his conduct or behaviour but would essentially sidestep those safeguards, placing him in an impossible position.

The health board submitted that the investigation was non-disciplinary in nature and would not seek to apportion blame. It was designed solely to elicit the extent to which working relationships had broken down and to find a way forward. The contractual procedure therefore did not need to be followed.

In granting an injunction requiring that the working relationships investigation be terminated, the Court found that those conducting it had also inquired into the reasons why the consultant’s relationships with his colleagues had broken down and whether his conduct was consistent with the standards required of an employee in his position.

A finding that his behaviour had caused the breakdown in relationships would imply some blameworthiness on his part and would thus have the potential to damage his career. Even a bald finding that his colleagues could not work with him for unexplained reasons would be likely to reflect on him adversely.

By launching the working relationships investigation in parallel with the contractual procedure, the health board had placed him in a cleft stock and breached the implied term of mutual trust and confidence in his employment contract. The Court emphasised that the injunction would not prevent the health board from reviewing the consultant’s position once the contractual procedure was completed.