If you are on the receiving end of an employment complaint, burying your head in the sand is positively the worst thing you can do. The point was made by the case of a training company which came to regret its costly failure to take professional advice and sensibly engage in Employment Tribunal (ET) proceedings. 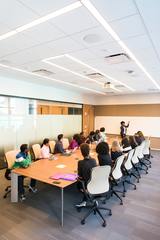 A woman who worked for the company claimed that she had been asked to consider leaving her job because of her knowledge of sensitive matters concerning a personal dispute between the owner of the company and his partner which culminated in police involvement. A settlement agreement to appropriately compensate her for the loss of her employment was proposed but never completed.

After she launched proceedings, an ET noted that the company had been notified of the woman’s complaint by service of documents on its registered address. It had been warned of the date on which her case was to be heard, but sent no legal or lay representative to the hearing. The case therefore went ahead in the company’s absence and without it putting forward any defence to the claim.

The ET noted that, despite the woman’s numerous requests for a written contract of employment, she had never received one. Before leaving the office for the last time, she had been assured by an HR adviser that her employment was continuing. She had never been formally dismissed, either verbally or in writing, but the company ceased to pay her a few months after her departure.

In those circumstances, the ET concluded that her employment by the company had continued to the present day and that she was therefore entitled to more than 12 months’ pay, dating back to the last occasion on which she received her wages. The company was ordered to pay her £23,512 net of tax. It would also have to account for Income Tax and National Insurance on that sum.