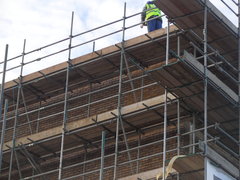 Purchasing flats before they are built in so-called ‘off-plan’ transactions is a popular means of snapping up desirable properties at reasonable prices. However, as one High Court case showed, such investments are far from risk free and should never be hazarded without taking professional advice.

The case concerned a single purpose company that engaged in the conversion of a hotel into private flats. More than 50 home buyers had bought flats off-plan, most of them paying 25 per cent of the purchase price as a deposit. However, the project turned out to be seriously under-funded and the development remained far from completion when the company became insolvent and entered administration.


The deposits, all of which had been ploughed into funding the development, were secured by way of purchasers’ lien. However, in a vain attempt to keep the project afloat, the company had also borrowed more than £4 million from a commercial lender, that money being secured on the property by mortgage.


After the administrators sought judicial guidance, the Court approved their proposal to sell the property’s freehold as if it were not encumbered by the mortgage or the purchasers’ liens. Despite objections from two of the purchasers, the Court found that other options had been adequately investigated and that the proposal was likely to yield the highest sale price and, thus, the best outcome for creditors.


Those purchasers, three in number, who had registered unilateral notices to secure their interests in the property prior to registration of the lender’s mortgage would take top priority amongst the creditors and be paid first from the sale proceeds. The lender would, however, come next in the queue and, after the mortgage debt was paid off, it was very unlikely there would be any money left to recompense the remaining purchasers. Unless the property sold for a substantially higher price than expected, they would therefore lose their deposits.