The internet can be a dangerous place and pouring your heart out to strangers online inevitably creates a risk of blackmail. In one case, however, the High Court came to the aid of an American financier who made the mistake of entering into sexually explicit communications with a woman he met on a dating website. 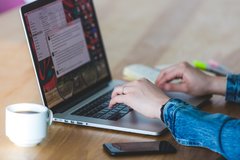 The financier, a married father, made frequent business trips to the UK and was in want of someone with whom he could socialise. He accessed a dating site which was targeted at bringing together ‘sugar daddies’ with ‘sugar babies’. The woman had a profile on the site and, after making contact, they entered into sexually charged correspondence via social media and email.

Soon after the messaging began, the financier alleged that the woman made the first of her persistent demands for money from him, backed up by threats that she would otherwise tell his family about his activities. He had to date paid her £125,000 and argued that it was a straightforward case of blackmail.

A private investigator engaged by the financier reported that his correspondent was a woman who had used an assumed name on the dating site. The report also stated that IP addresses connected to the woman had been blacklisted on 24 occasions because they were believed to be the source of blackmail demands.

The financier issued proceedings against the woman, alleging harassment and misuse of private information. He sought a pre-trial injunction against her, requiring her to desist from her activities.

Granting such an order, the Court found that there were compelling reasons why she had not been notified of the proceedings, not least the risk that she would make good on her threat to contact his family. The matter was urgent in that she had recently pressed for a further payment and shown signs of impatience.

The Court noted that the financier on the face of it had a strong case that the woman had been blackmailing him. The email traffic between them provided ample evidence of her demands and his payments. He had a reasonable expectation that his correspondence with the woman would be kept private.

Her right to freedom of expression did not extend to blackmail or harassment and was likely to be firmly outweighed by his human right to respect for his privacy and family life. The injunction would remain in place until the full hearing of the matter, at which the woman would have an opportunity to oppose its continuation. Neither the financier nor the woman were identified in the Court’s judgment.