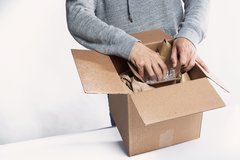 Accidents at work can have dreadful consequences and, if the worst happens, you should seek legal advice straight away. A delivery driver who did just that after he tripped and fell from his vehicle’s tail lift received seven-figure compensation for the grave injuries he suffered.

The middle-aged driver was making a delivery when he fell after catching his foot on a stray pallet. He suffered a fractured skull when his head hit the road, resulting in a brain injury that compromised his ability to work and look after himself. He has since been dependent on intensive assistance from his mother and others.

Proceedings were brought on his behalf, alleging negligence on the part of the logistics company he worked for at the time. However, a contested trial of his case proved unnecessary and, following negotiations, the company agreed to settle his claim for a lump sum of £1.69 million. The High Court approved the settlement, which represented 65 per cent of the full value of his claim.