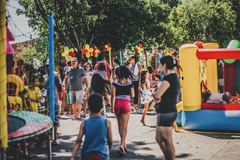 Event organisers and health and safety professionals should take careful note of a High Court case in which a charity was found partially to blame for an accident in which a woman was run down by a lorry during preparations for a bonfire night fair.

The middle-aged woman was wheeling her pushbike across common land which was normally closed to all but local authority maintenance traffic when the lorry, which was loaded with dodgems, ran over her. She was in an induced coma for 17 days and her right leg had to be amputated.

After proceedings were launched on her behalf, the High Court found that the charity which organised the event was negligent in failing to ensure that public access to the common was restricted by barriers or stewards whilst fairground vehicles were manoeuvring into position.

There had been no assessment of the specific risks involved and confusion over who was responsible for marshalling vehicle movements on the common had led to an obvious lack of safety. Had pedestrians and vehicles been properly separated, the accident would probably never have happened.

The woman’s legal team conceded that she had herself been careless and bore 12.5 per cent of the responsibility for her own misfortune. The Court found that the lorry driver, whose negligence was the immediate cause of the accident, bore 65 per cent of the remaining liability, and the charity 35 per cent. The ruling means that the woman is entitled to recover 87.5 per cent of the full value of her very substantial damages claim.